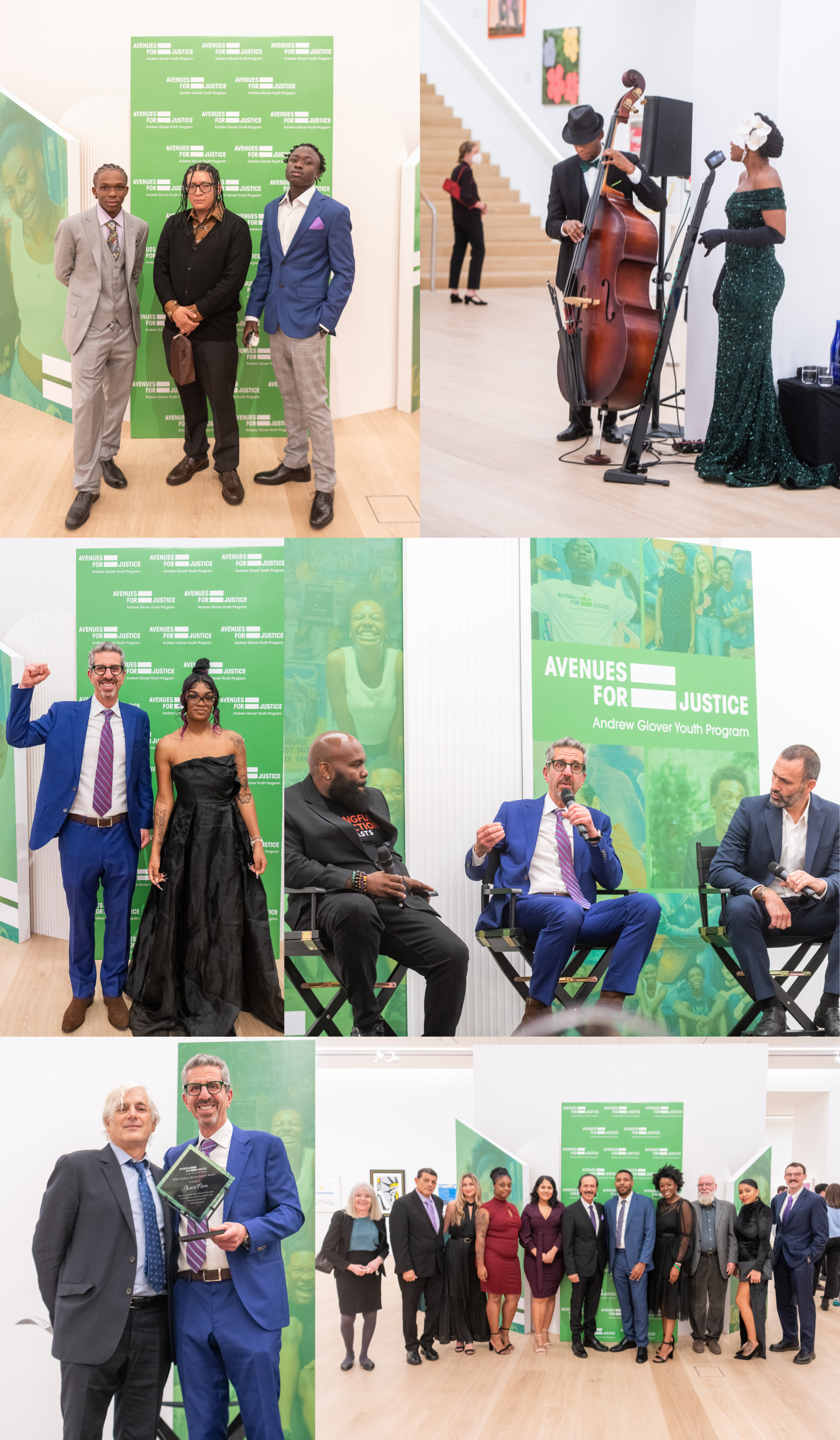 ­To continue our 40+ history of working toward reducing recidivism rates within NYC at-risk youth, we hosted our third annual Second Chance Experience event last Thursday evening at the Phillips Gallery and Auction House. Board members and Program Participants were joined by fellow justice reform activists to celebrate Anastacia, this year’s recipient of AFJ’s Second Chance Award, and Jason Flom, the Founder & CEO of Lava Media and Lava for Good Podcasts. Anastacia, who was initially arrested in 2018 on gang assault charges, received the award for her great strides in turning her life around while at AFJ. Jason Flom received this year’s Andrew Glover Justice Award for his unwavering activism in the fight against the criminal “injustice” system.

Ahead of the official program, guests were treated to the beautiful artwork at Phillips, a jazz performance by Acute Inflections, followed by a moving performance by the children from the Urban Assembly School for the Performing Arts (UASPA). Upon introductions from our Executive Director, Angel Rodriguez, Chair Emeritus Josh Baer, and Board Chair Alanna Rutherford, the team held a heartfelt on-stage panel discussion with Jason Flom, Josh Dubin, the Executive Director of The Freedom Project, and Lorenzo Johnson, who was wrongfully convicted and who worked with The Freedom Project to help overturn his case.

Emphasizing our mission of “Service Not Cells,” the trio spoke to the work AFJ has been doing on the frontlines to help reduce recidivism in NYC youth--stressing to guests the varying costs of legal proceedings within the NYC court system. While our services at AFJ cost as low as $5,750, the costs for incarceration of one individual can be upwards of $500,000.

The event served as a part of our fundraising efforts and raised our goal of $250,000 towards providing our ATI court-involved and at-risk Participants with court advocacy and wraparound services instead of incarceration. During his acceptance speech of the Andrew Glover Justice Award, Jason Flom, generously pledged to donate an additional $25K to the event and challenged the evening’s guests to collectively match his contribution.

It’s rare to come across someone who actually practices the kindness that they preach like Jason,” stated Dubin in his introduction speech. “Between his work with The Innocence Project and Wrongful Conviction, to opening up his home to recently exonerated individuals who have been granted clemency and helping them get jobs, this is a man whose altruism is boundless.”

In addition to honoring Jason’s work and dedication to the cause, we also celebrated the successful completion of program Participant Anastacia. Anastacia, who was originally charged with assault as a pregnant teenager, received the organization's Second Chance Award and was accompanied by both her parents. Originally facing up to seven years in prison before AFJ took over her case, Anastacia was granted Youthful Offender (YO) status in 2019 and Conditionally Discharged to Avenues for Justice for three years, resulting in her record being sealed. Anastacia was able to celebrate being one of the 94% of Participants who have successfully avoided reconviction after three years of enrollment into the program.

“I know how hard it is to be a new mother caught on the wrong side of the law,” says AFJ Court Advocate, Elsie Flores, who was assigned to Anastacia’s case. “But Anastacia is a shining example of the importance of second chances, and a reminder of the impact of Avenues for Justice’s work.” Both Anastacia and Elsie hope to inspire other Participants to take action and commit to changing their own lives.

Avenues for Justice is extremely grateful to Jason Flom, Joshua Dubin and Lorenzo Johnson for supporting our mission. A very special thank you to Phillips Auction House and Gallery’s Americas President, Jean-Paul Engelen, and his amazing team at Phillips for hosting our Second Chance Experience at their beautiful venue where guests enjoyed artwork on display in the various galleries. We thank our Board of Directors and Supporters for their generosity in making the 2022 Second Chance Experience a very successful evening. A special thank you to Melva LaJoy Legrand, Maleka Lawrence and Woke Media for all their tireless work in bringing the magic to the Second Chance Experience!

Thanks to all of You, we are able to help many Participants, like our Second Chance Recipient Anastacia, and to highlight what’s possible when young people are given support and #ServicesNotCells.

Support us with a donation.